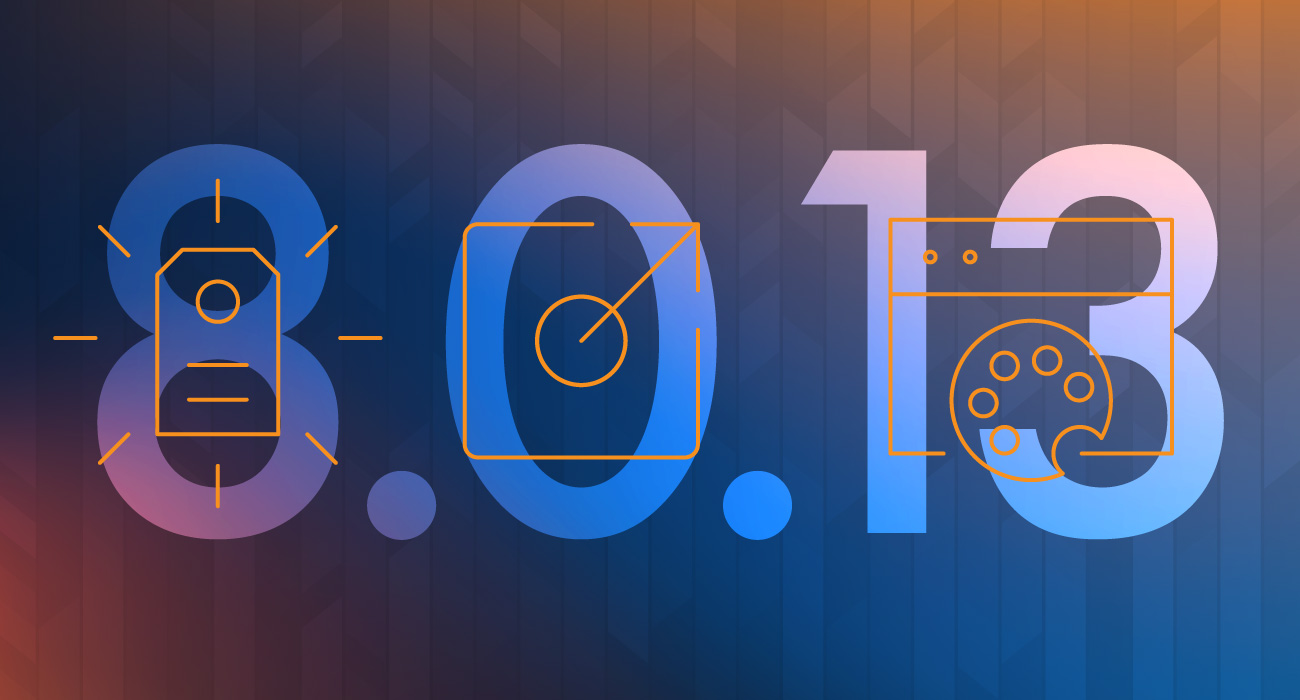 It’s been full steam ahead for the development team here at Inductive Automation as they work on bringing more features and improvements to Ignition. Our newest arrival, Ignition 8.0.13, brings two new features in Ignition Perspective, an improved feature for handling security certificates, and Theme redesign. Other features are focused on the platform, giving you better security management for tags and an improved method for exporting projects. Read on to get more details.

Back in ye olden days of 2018 and prior, Ignition didn’t have a concept of an Identity Provider. If your Gateway had users configured, then you had a User Source, and your users and roles were defined within.

When it came to tags, you could restrict who had read or write access to a tag based on roles and general location on the network that the runtime was launched on (“Security Zones,” if you’re unfamiliar).

In more modern times, Ignition 8 introduced support for Identity Providers and the concept of a Security Level. Security Levels are a hierarchy of rules that can be applied to “a thing”: that “thing” commonly being a Perspective session, as of present day. They take roles and security zones into account, but they’re considerably more flexible since you can create arbitrary levels, and then configure an expression that evaluates at runtime, allowing you to provide access to certain features in your project based on many different factors.

Perspective has been making great use of Security Levels — so much so that we want to extend their reach into other areas of the software. In 8.0.13, tag permissions are the area to adopt them.

The next time you open the Tag Editor after upgrading, you may notice the security section has some different properties: 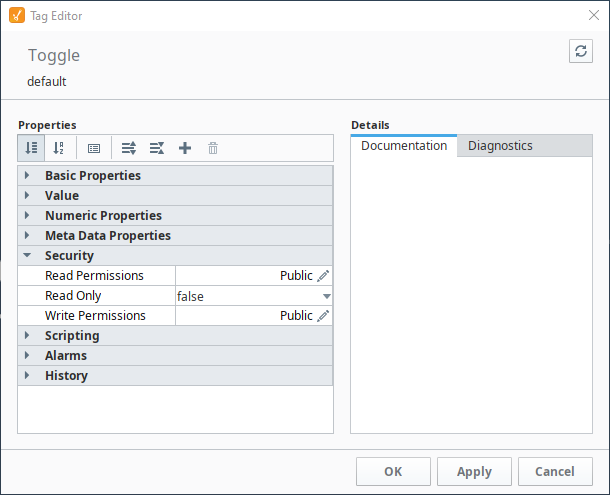 In addition to a dedicated “Read Only” property, we have the two new “Permissions” settings, which allow you to specify which Security Levels (or combination thereof) are allowed to interact with any tag. 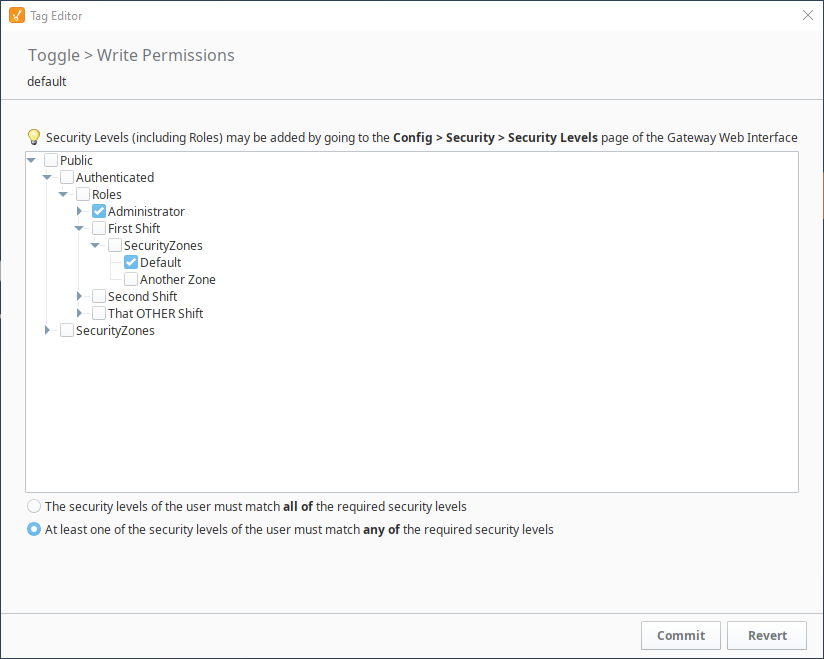 When upgrading from an older version of Ignition, we’ll update the permissions settings on your tags to use the appropriate combination of roles and zones, so you may not even notice this new user interface in live systems.

If you want to take a closer look at at this change in action, we made a video about it:

We made two smaller yet impactful changes to how a project is exported from the designer. Specifically, this dialog: 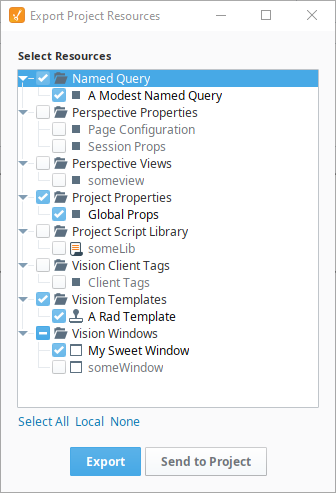 It’s the same window you’re probably familiar with, but with some small differences. First of all, you may notice the blue “Local” text right below the tree. This is a new local option we added, which when selected, basically checks only resources in the current project, excluding inherited project resources. This is also the default selection option when that window opens now, so we won’t automatically include other resources from an inheriting project, unless you choose to do so: using the “All” option.

Secondly, you probably noticed the “Send to Project” button. Have you ever been building something really useful in a project, and found you wanted to move it to another project on the same Gateway? This comes up quite a bit if you’re trying to use project inheritance, as you’ll inevitably make something for one project, then realize it should probably be in an inheritable project, so that other inheriting projects can make use of it too. But to make that happen you have to do the “export-project, designer-switching, import-project” shuffle. If only there was an easier way.

Well, my friend, 8.0.13 is where your hopes and dreams come true. That’s what the “Send to Project” button is for. Pressing that button will take you to a new window that allows you to pick another project to send the selected project resources to.

Again, on paper these are smaller features, but if you’ve been making use of project inheritance, they’re both solid quality-of-life improvements.

Trusting Certificates in the Launchers and Mobile App

This approach is ideal if the IT department habitually pushes out files directly to devices when deploying new systems. However, if you don’t have that luxury, we added a new interface in the launchers that makes this process easier.

First, launchers now have a user interface that allows you to trust security certificates on client/designer launch. 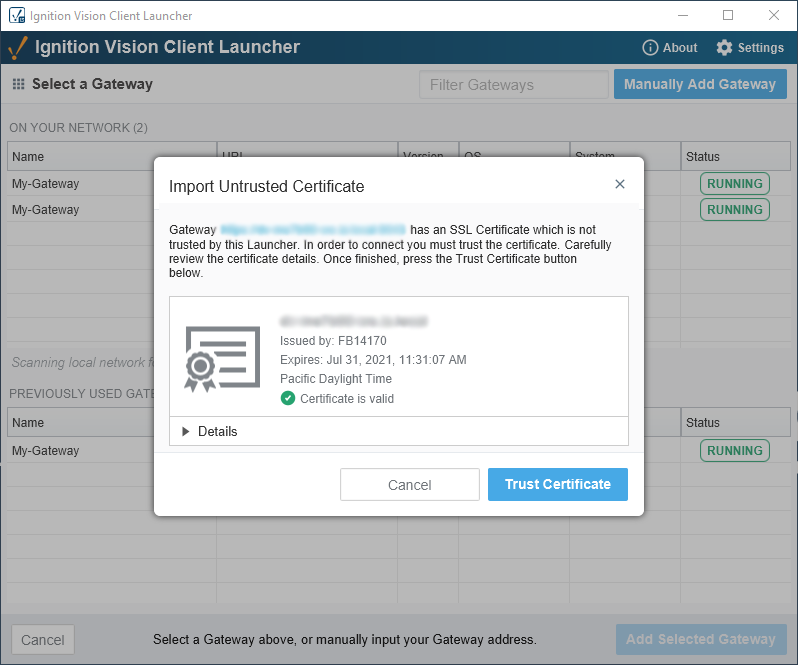 In addition, we added a new Trusted Certificates table under the launcher’s settings, allowing you to view which certificates have been trusted, trust new certificates, or remove existing certificates. 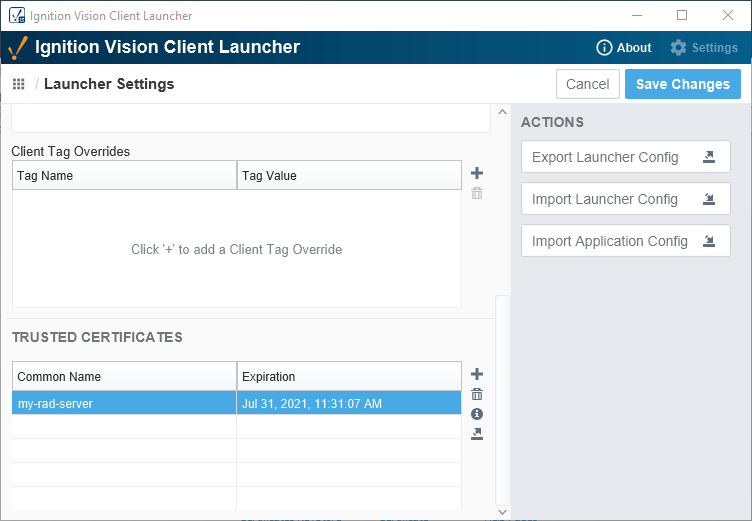 As for the Perspective mobile app, we made a similar improvement in that the app will now provide you with a new interface to trust certificates, albeit with a slightly different look to better fit on your phone. If you’ve been keeping your mobile app up to date, you already have this new feature ready to go.

In the 8.0.11 blog post, we teased the upcoming Perspective Theme re-implementation. We’re happy to announce that it’s here! Once you upgrade to 8.0.13, you’ll find a sleek, improved look for all components, as well as the newly redesigned themes.

I don’t want to spend too much time in this post discussing theming, mostly because we’ve got a follow-up post coming out soon that will delve into the thought process behind the update. If you wanted to start playing around with it now, we do have a user manual page that lists the default themes and shows how to switch between them:

Of course, we also have an IU video if you’re interested:

To learn more about all of the other changes and updates in 8.0.13, see the release notes or the Ignition User Manual. As always, we encourage you to tell us what you think and what you’d like to see in upcoming releases. Keep your eyes peeled for the next release train — it won’t be long until 8.0.14 rolls into a station near you.