There are several exciting updates in this latest version of Ignition, especially related to the Ignition Perspective Module. Check out the highlights of what our development team has been working on in the past few months!

Since its release, Ignition Edge has had the ability to store tag history locally inside its internal database. This feature provided a way to visualize historical records in Edge projects without needing a separate SQL database, which was useful for the smaller devices that Edge was designed for. Version 8.0.4 brings this feature to standard Ignition Gateways. 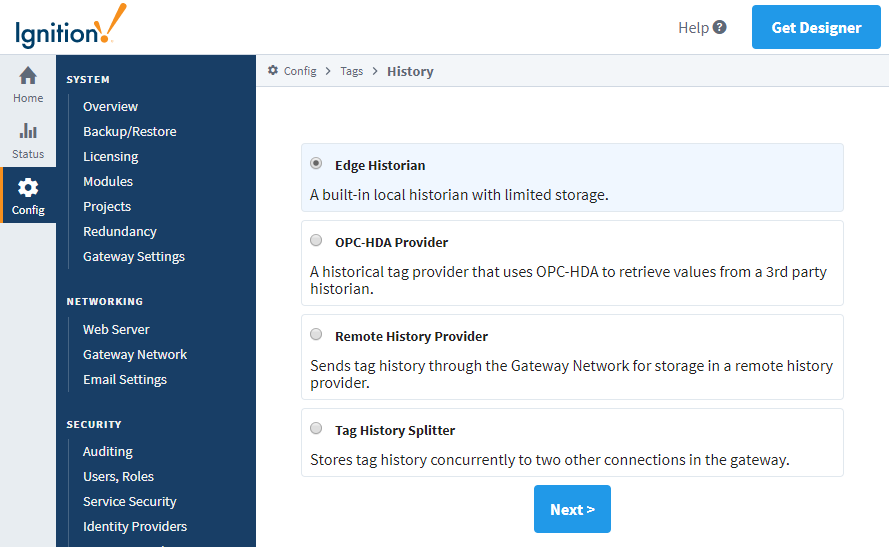 This new built-in historian allows your Ignition Gateway to record tag history internally, without the need for a separate database installation. It works on a standard Gateway in the same way as it does on an Edge Gateway: one week of storage capacity, with the ability to synchronize the records with another Gateway with the Enterprise Administration Module (EAM).

New installations can use this feature as a means to quickly build a proof of concept for a prospective user, or be used in an impromptu demonstration — all without having to worry about installing a separate piece of software!

The Perspective Map component received a large number of scripting updates. Fifteen callable methods were added to the component, allowing you to perform complex manipulation on the component from the session, such as controlling the zoom and setting the visible boundaries. Here we see the flyTo method, which performs a smooth pan to a new set of coordinates over a configurable duration.

Additionally, nine new Component Events have been added to the component, providing an opportunity to trigger scripts as the user interacts with the map. For example, the onMarkerClick event fires when a map marker is clicked, allowing a script to open a popup view.

There have been several significant changes to Perspective in regard to scripting, the first of which is the new system.perspective.print() function. Those scripters familiar with the Vision Module know that Python’s “print” command is a useful tool when it comes to troubleshooting scripting issues. However, due to Perspective’s scoping, print statements would only appear in the wrapper log, which can be difficult to access. This new function allows you to send strings to the Designer’s console, as well as your web browser’s console when called from a Session. Scripters rejoice!

Additionally, this update introduces the system.perspective.closePage() function, providing an opportunity to close a page without using the dedicated Component Event Action. This is useful as you can now intermix a Python script with the ability to close a page, which was difficult to do in the past due to the execution order of Actions.

As always, the changelog and Ignition User Manual detail the rest of the changes in this release. The next train reaching the station will be Ignition 8.0.5.