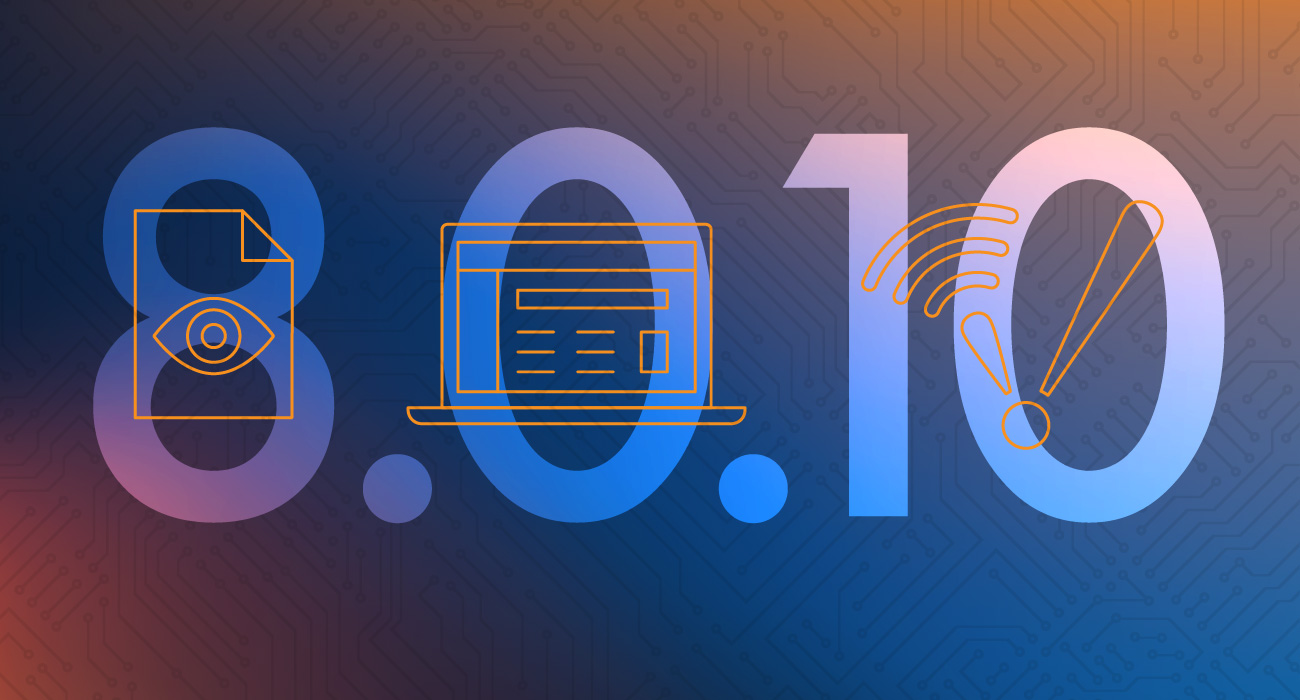 The release train is chugging right along as Ignition 8.0.10 rolls into the station. After making a quick course correction with Ignition 8.0.9 (more about that in the next paragraph), 8.0.10 puts things back on track by introducing two new community-requested features and rounding out our Ignition Edge updates.

If you’ve been following along with all of these blog posts, you may have noticed that we skipped 8.0.9. We posted about it on the forums, but the short version is that we found a potentially serious bug that impacted Perspective style classes after 8.0.8’s release. As a result, we did not want to leave 8.0.8 as the most recent stable version. Limiting how far 8.0.8 could propagate seemed like the best option at the time. Thus, we decided to expedite 8.0.9’s release, and that it should only contain patches for the issue. A few days later, we had 8.0.9 on our Downloads page. We figured 8.0.9’s blog post would’ve been fairly lame since it really only patched the issue we found and it came out within a week of the previous post, so we decided to skip it.

On the bright side, we found some further opportunities for improvement in our build process. Specifically, we want a better patching mechanism. In the past (long before Ignition 8 and the release train), we would use minor version updates to deliver patches in these cases where a potentially harmful bug made its way into a production version of Ignition.

Unfortunately, we found out the hard way that our release train methodology doesn’t really support the idea of impromptu version changes. It really messes with our release cadence: features that were targeting 8.0.9 had to be pushed back to 8.0.10, we needed to update the release notes and notify folks who were expecting certain fixes in 8.0.9, etc. These pain points were worth it if it meant replacing 8.0.8, but we think we can do better.

We’re currently looking into a new strategy to take should we ever need to quickly push out a fix like this again, as well as analyzing how we missed the problem in the first place. With that out of the way, let’s talk about the new features in 8.0.10.

First up is a long-awaited community request. Since Ignition 8.0.0, Perspective hasn’t really had a first-class solution for embedding a report from the Reporting Module into a Perspective page. There were/are ways to use the PDF Viewer component to show a report that was saved as a PDF, or host the report using a WebDev resource. These were just a couple of clever approaches you, our users, found to solve this problem, but they all required a bit of effort to set up. Thus, talking about reporting in Perspective was always a sore subject for us.

Fortunately, that all changes with 8.0.10. Now, Perspective has a dedicated Report Viewer component! 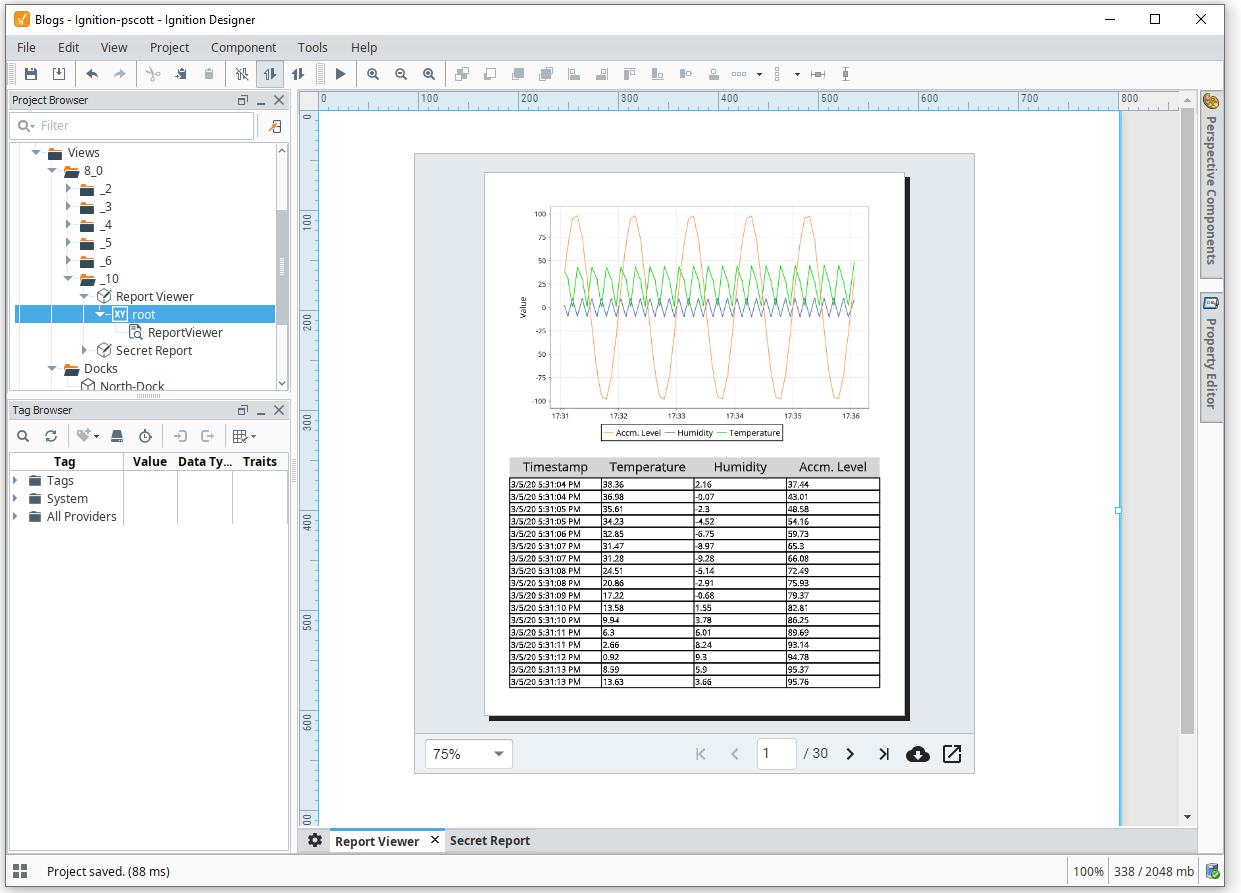 You’ll find it as friendly to use as Vision’s Report Viewer. The component effectively lives in a browser, so we decided to lean on some of your web browser’s built-in printing and downloading capabilities. Below you can see me interacting with the component from a session.

Ignition 8 introduced the concept of concurrent design sessions, allowing multiple users to work on not only the same project simultaneously, but the same resources — something you could never do in 7.9 or prior. Early on in 8.0’s life, we introduced a conflict resolution window that would allow users to determine what happens if the changes they’re trying to save conflict with another user’s recent changes. 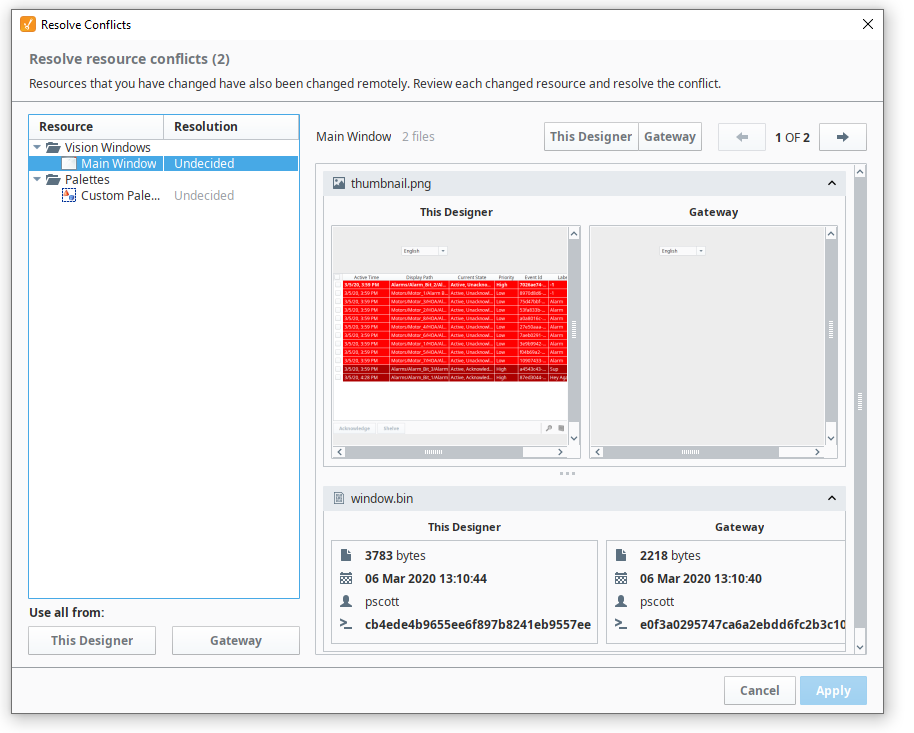 While a good start, that window only appeared after you tried to save. You, our users, wanted more; specifically, a way to know beforehand if someone else is working on a resource. 8.0.10 introduces a couple of changes to help. 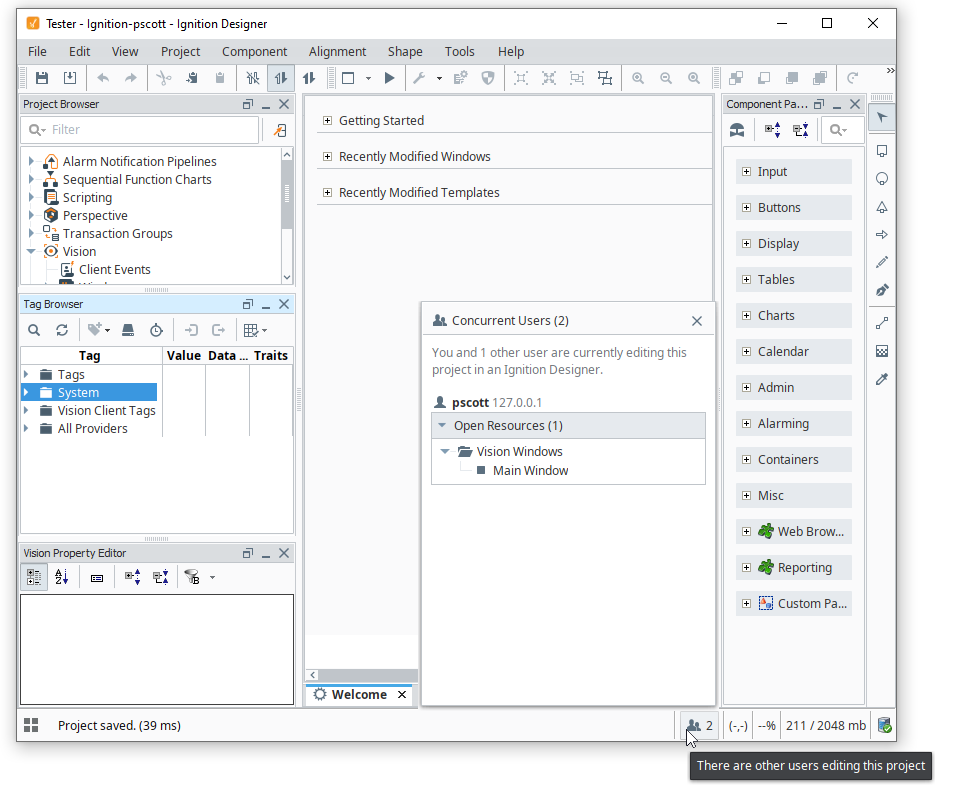 If you happen to open the same resource as them, we’ll give you a friendly reminder:

And make the icon red if there are “overlapping” resources, meaning multiple users have the same resource(s) open. This way you’ll know if one or more other Designer instances have a resource open. 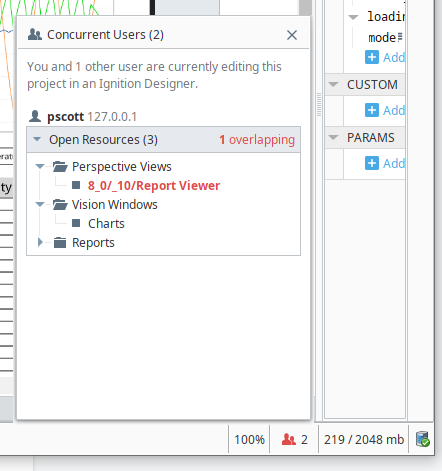 If another Designer instance saves the project, you’ll get a new update notification, providing an alternative method to update the project. If there are conflicts between the update and your local copy of the project, we’ll quickly take you to the conflict resolution window, as shown below:

We hope those of you out there working in teams will find the new interface helpful. Let us know your thoughts, either by posting here or on the forums.

You may have noticed that we made some changes to our Ignition Edge lineup, namely the new plug-in offerings. We have some updated pages that describe the offerings in detail, but I’ll provide a quick overview of the plug-ins:

Ignition Edge Panel is still responsible for providing visualization options on Edge, although we still allow you to launch clients while on the trial. However, now you choose to use either the Vision Module or Perspective. You can also freely switch between the two via a new property under Gateway Settings on the gateway.

The old Edge Enterprise plug-in has been split, to better encapsulate the various feature offerings. This new Ignition Edge EAM plug-in provides … EAM functionality (shocker, I know). Effectively, this means an Edge gateway with the EAM plug-in can be configured as an Agent and participate in EAM architecture.

This is the other part of Edge Enterprise. This plug-in is responsible for allowing an Edge gateway to “sync” stored records with an Ignition gateway, and a couple other things. You can think of this as the “sharing” plug-in, which I’ll explain in a moment.

Second, this plug-in allows alarms on Edge tags to use remote alarm pipelines. Thinking of a hub-and-spoke style architecture, with the spokes made up of edge gateways, you could put your alarm notification system on the hub (an Ignition gateway), and each edge system would send alarm events to the hub, which would then trigger alarm notifications to be sent out. This is fantastic if each Edge installation needs to be sent out a notification, as you don’t have to worry about the Edge gateway having network access to your SMTP server (or whichever notification mechanism you’re using).

Lastly, this plug-in allows access to Sync Services. Edge doesn’t connect to an external SQL database, so any records collected for tag history and such are only available to the Edge gateway, and can’t be accessed by a third party. The Sync system allows an Edge gateway to pass those records to an Ignition gateway, allowing the Ignition gateway to store them long-term. So, if you want any records collected on the Edge gateway to make their way into a SQL database, you would want this plug-in.

So, the whole point of this plug-in is to facilitate ways to share things between an Edge gateway and an Ignition gateway.

Ignition Edge Compute allows you to create Web Dev scripting resources, giving Edge a bit more capability with that module. It also allows you to configure Gateway Event Scripts on Edge, and access Message Handlers on other gateways. Without a doubt, this is the “scripting” plug-in.

This is effectively our old MQTT plug-in (a.k.a. Ignition Edge MQTT), but with a fresh new name. The Ignition Edge IIoT provides access to the MQTT Transmission Module, all Inductive platform protocol drivers, the Opto22 SNAP PAC driver, and the EFM Emerson ROC Module (once it’s available for Ignition 8).

In addition, this plug-in allows Edge to expose its OPC UA server, allowing any OPC UA client to connect.

Finally, this plug-in also allows remote tag providers to be created against the edge gateway. You’ll note that this is the same feature offered by Sync Services. We figured the remote tag feature is useful for both this plug-in and Sync Services, so we overlapped the functionality to make it easier for everyone.

More Updates on the Way

To learn more about all of the other changes and updates in 8.0.10, see the release notes or the Ignition User Manual. Tell us what you think and what you’d like to see in upcoming releases, and keep an eye out for 8.0.11 to arrive at a station near you.