With energy consumption a major concern across the global business landscape, companies rely heavily on third-party companies to keep their energy usage and costs at efficient levels. Cofely is one such company, which provides the essential services of designing, installing, and managing local and renewable energy solutions.

Cofely is a division of GDF SUEZ, a French multinational electric utility company. Cofely is headquartered in Madrid, Spain, and it has established itself as a leader in energy and environmental efficiency services throughout the country.

In 2009, Cofely began using SCADA software to help businesses and local authorities manage, control, and analyze energy consumption data. But a few years later, the company faced a project that required more capabilities than any traditional SCADA software could provide. That’s when Cofely began a search that led to the software that is now the corner-stone of its energy monitoring and control system: Ignition by Inductive Automation®.

Taking on a Country-Sized Project

In 2012, one of Cofely’s project managers and his team were tasked with developing a platform for monitoring and controlling their own company’s energy services contracts because most software used in energy management allows monitoring but not control, the Cofely project team had to find a SCADA solution that was suited to their industry and could take on the enormous endeavor of making its services available throughout Spain.

The project encompasses many different facilities such as public buildings, swimming pools, industrial plants, and even street lighting. It involves over 22,000 tags, and nearly 600 devices and 50 clients, and those numbers continue to grow.

The size of the project presented many challenges. There were a large number of prospective users, all of whom needed access to the system without it being installed at each client. There was an enormous amount of data in many different formats, and vast geographical distances between installations. Also, the software had to be flexible enough to grow with the system as new installations were added.

Cofely needed a SCADA solution that would give their customers the ability to analyze all their real-time and historical energy data, and would also be cost-effective and scalable. After much research, the team came across Ignition HMI, SCADA, and MES software.

“To me, Ignition is a groundbreaking software which provides many features that go far beyond what other well-known and old-fashioned SCADA can offer,” says José Granero Nueda, project manager at Cofely. “Ignition is much more than SCADA; it is amazing the things that can be done and how quickly develoment and deployment of a complex solution can be carried out with it,” he says.

Granero’s team was able to use Ignition’s unique features to fulfill the new system’s requirements. Ignition provides the company with unlimited tags and clients at a reasonable price. The software doesn’t need to be installed or maintained at the client level because it is fully web-deployed. It connects to SQL databases, which lets the company leverage SQL data without expensive additional software. It supports OPC-UA, so it can connect to the many devices with embedded OPC-UA servers that are dispersed throughout the country. The modular architecture of Ignition makes the system scalable so it can match the scope of new contracts that will be added in the future.

With the ability to quickly develop and deploy their new system, Cofely began creating an Ignition-based platform that could easily handle the large scale of the project. Ignition’s features allowed the team to focus more time on developing the project and less time dealing with technical hurdles. 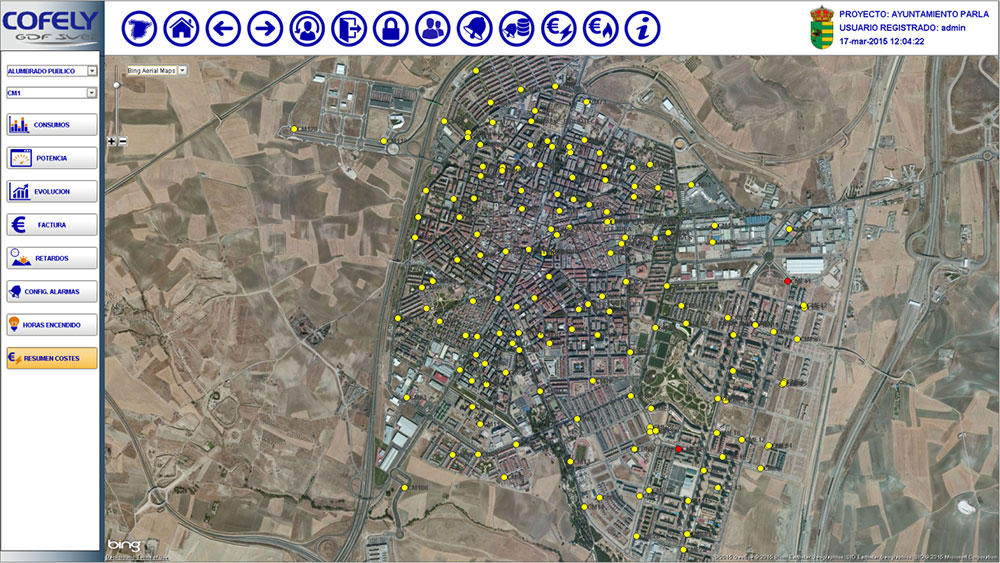 A unique part of this project was the task of developing a graphical user interface (GUI) to keep track of the various sites in the system. Ignition’s use of modules and its easily accessible software development kit (SDK) were factors that made it stand out as the clear choice for this project.

“Given that the project scope required monitoring several hundred sites, and thousands in the long run, we needed a graphic interface to jump from one site to another by clicking on a map icon, as well as to display main status and alarm conditions for every location,” Granero explains. Since the project spans across all of Spain, setting up the ability to locate and easily switch between remote sites was a huge undertaking that the project team was determined to see to fruition.

By searching on Inductive Automation’s online user forum, the Cofely team learned that a forum user named Lionel Mazeyrat had created an interface using OpenStreetMap. This confirmed to them that it was possible to integrate an existing open-source geographical information system. Using the Ignition Module SDK, they completed their own module, which integrates OpenStreetMap and Bing Maps,and puts all of the sites in Spain at their fingertips.

A System of Their Own

The Ignition system has been in place since November of 2013, and it has been running smoothly and without a hitch. One of the main benefits, according to Granero, is that the company now has its own system which it built and can control completely. Because the system is not dependent on third-party servers in the Cloud, the company can customize it as its needs evolve.

The flexibility of the system allows Cofely to maintain its reliability, performance, and security. Its use of Ignition is also unique in the field of energy manage-ment because the system can control their facilities as well as monitor them.

Cofely plans to continue expanding the project and incorporating new features along the way. One of those new features will be an implementation of the International Performance Measurement and Verification Protocol (IPMVP) to improve energy efficiency tracking. The company is also considering developing a module to automatically download bills from the main utilities and compare them with the amounts calculated by their system, so that clear deviations can be identified as soon as possible.

“Ignition has become our first choice when selecting a product to develop a solution, either for the industrial or the service sector. We know it will allow us not only to successfully complete the projects but to provide our customers with an added value we wouldn’t be able to give them otherwise,” Granero says.

The benefits of applying machine learning in complex industrial systems can be immense, and Enuda has found an open-source approach using Ignition that can give the benefits of ML at a low cost. In this session, you'll learn how they did it by exploring their considerations, testing (and failures), as well as why they decided on using a combination of Docker, Flask framework, and Ignition to create their solution. The session will include an example using the chosen environment for a practical case, and advice on how to get started with machine learning and Ignition.

Design Like a Pro: How to Best Plan Your Perspective Project

Traditional SCADA software has fallen behind when trying to keep up with advances in information technology, but some companies stand to gain from this.