Streamline the Creation, Organization, and Visualization of Robust Logic Systems

Add sequential function charts (SFCs) to Ignition in order to streamline the creation, organization, and visualization of robust logic systems. The Ignition SFC Module’s powerful visual programming language allows you to write complex logic in a simpler, more intuitive way. The SFC Module works seamlessly with Ignition1, and represents a leap forward in the capabilities of the software. 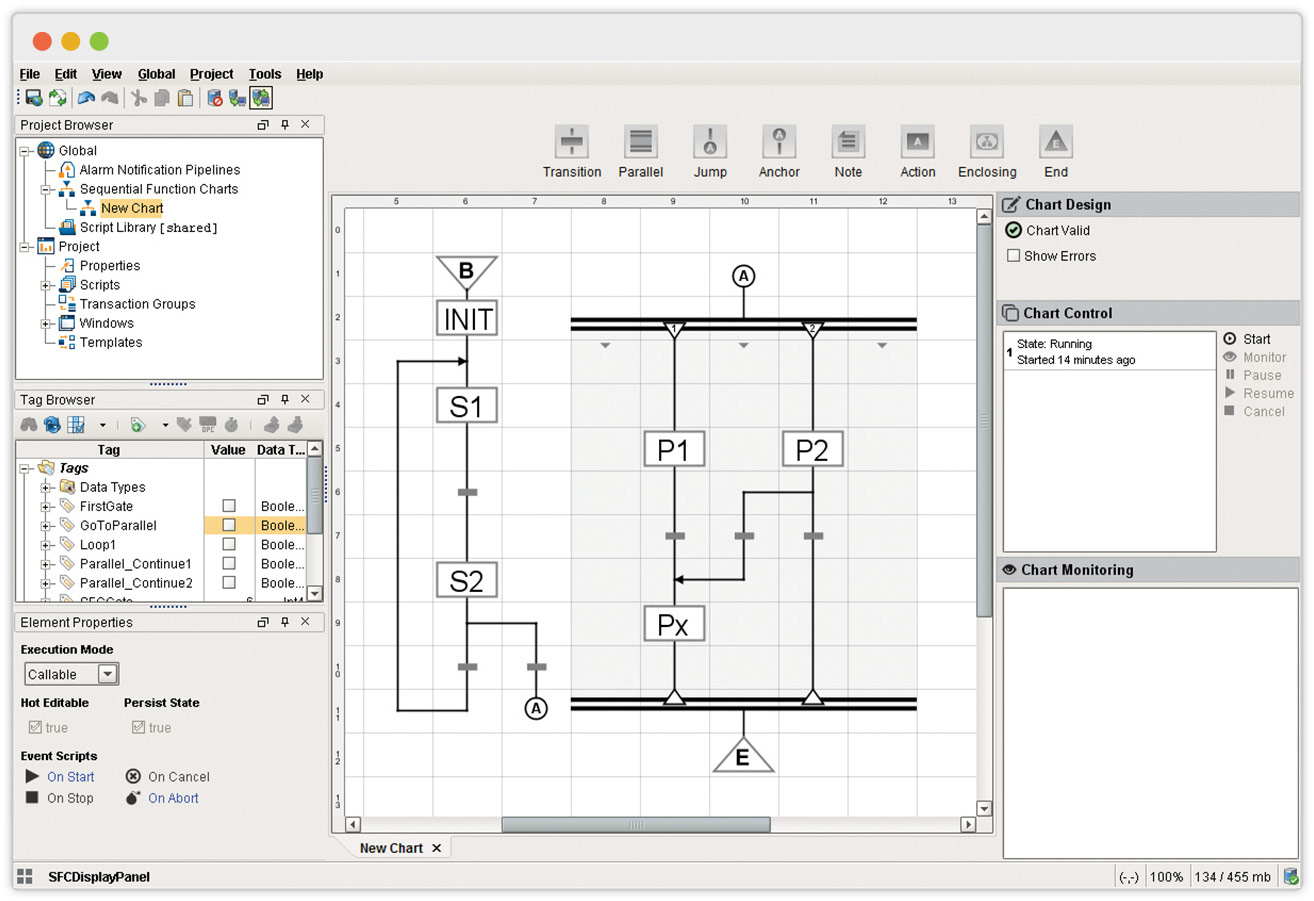 The SFC Module’s visual, drag-and-drop programming tool makes the process of writing complex logic much smoother than using the basic Python scripts included in Ignition. Its standardized programming method, part of the IEC 61131-3 specification, will be familiar to many users who have experience in programming PLCs. With a simple visual interface, you can use steps, transitions, parallel blocks and other drag-and-drop elements to create complex charts. SFCs within Ignition can make use of scripts, tags, and other elements already available in the Ignition platform.

You can monitor charts visually in the Ignition Designer and clients, watching each chart execute its logic, down to which specific step is currently running. You can even inspect the chart’s internal variables as it runs. The visual nature of SFCs make them much easier to troubleshoot than Python scripts.

Now it takes far less time to build any type of robust logic your enterprise may need: long-running tasks, parallel tasks, tasks that pause for certain conditions before proceeding, loops, sub-charts, and more.

In some circumstances, changes can be made to charts that are already running. This can be a powerful way to fix mistakes without requiring a chart to be restarted.

The module allows you to instantiate multiple instances of any chart. Each instance can be configured with different starting parameters, allowing the instances to be independent from each other.

Charts may be designed to run for a very long time. They can even keep running if a Gateway is restarted by pausing on shutdown and resuming on startup. SFCs also support redundant Ignition setups to ensure the chart keeps running even if the primary Gateway fails.

The SFC Module is a SCADA module for Ignition, the powerful HMI, SCADA, MES, and IIoT software from Inductive Automation. The SFC Module integrates seamlessly with Ignition and with all other modules in the Ignition SCADA suite. Because the module is built upon the power of Ignition, it shares the same advantages, such as cross-platform compatibility, unlimited free clients, robust out-of-the-box SQL database support, and fast installation. Leveraging the full power of Ignition, it is a SCADA logic engine unlike any other on the market.

Some of the companies that depend on Ignition:

Learn More About Other Ignition Modules